And you can't ignore mistakes?

You are in the wrong place for the question

wiebenor, Hello! Unfortunately, the mod has not been updated for a long time ... Therefore, most likely it is not compatible! I have a lot of work so far, so I can't update mods yet. Steam also disabled direct mod downloads for other games, which broke my automatic mod update system.

Forgive me for saying, but this mod doesn't work with the wicked whims mod and I'd like this functionality to be able to be used concurrently to, and with, wicked whims... There's supposedly clothing mods a guy can do, to enable something similar to the nudity I expect, but I have no clue how to mod clothes in Sims 4, and it's made to sound complicated when most people give directions, or they barely tell you anything besides the fact that it's as easy as"edit form fitting clothes and you're done"... Need to at LEAST get this mod working with wicked whims enabled...

- Now includes the CE patches made by Heart Eyes 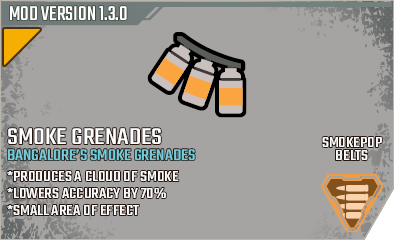 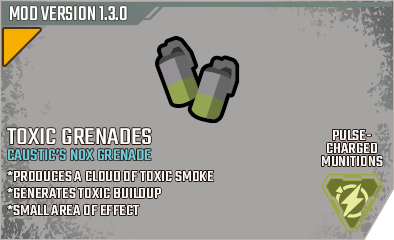 I’m a graphic designer and an amateur programmer which roughly translates to a perfect modding material, however I never had the strength and patience to actually sit down and learn how to mod my favourite game - Rimworld. I was always worried of a new update totally destroying my hard work with new game mechanics, however since 1.0 got released, the update possibility dropped substantially. This was the right time to create my first ever Rimworld mod, so go easy on me. I always found the vanilla game to be lacking in variety. Don’t get me wrong, it has everything it needs to be a very fun game, however it could use some new animals, weapons, technologies etc. With a release of Apex: Legends, an idea came to my mind - why not put both of these games together in a form of a mod?

Apex: Rimworld Legends is a vanilla-friendly weapon expansion adding over 20 new weapons to the game, all based on Apex: Legends weapons, but renamed into more general weapon types. VK-47 Flatline became a Bullpup Rifle, Wingman became a Hand Cannon and Mozambique is still useless. The graphics, sounds and statistics of these weapons are meant to represent unmodded Rimworld, with no weapon being overpowered or “Out of character”. Charge weapons have been expanded allowing for extra variety in combat, no longer forcing players to use a Charge rifle in late game. A new tier of late game weaponry has been added called “Mechanoid Weapons”, which becomes craftable after researching Johnson-Tanaka drive - One of the last available technologies before leaving the planet.

Following weapons have been added to the ga

me. Bear in mind that the statistics of these weapons will be constantly tweaked according to players’ feedback. 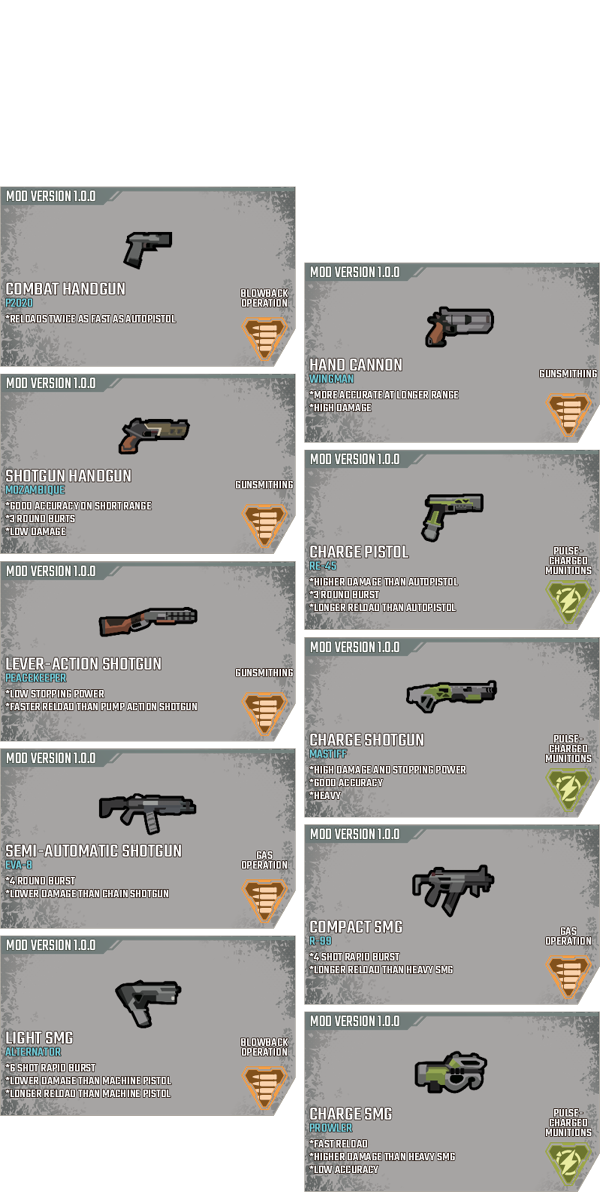 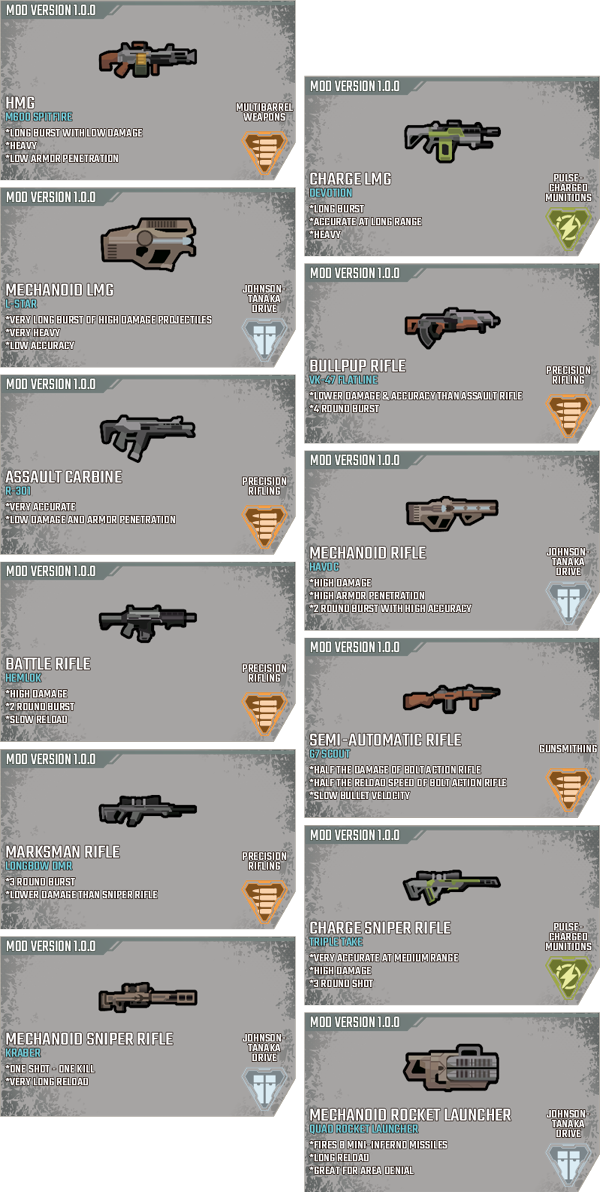 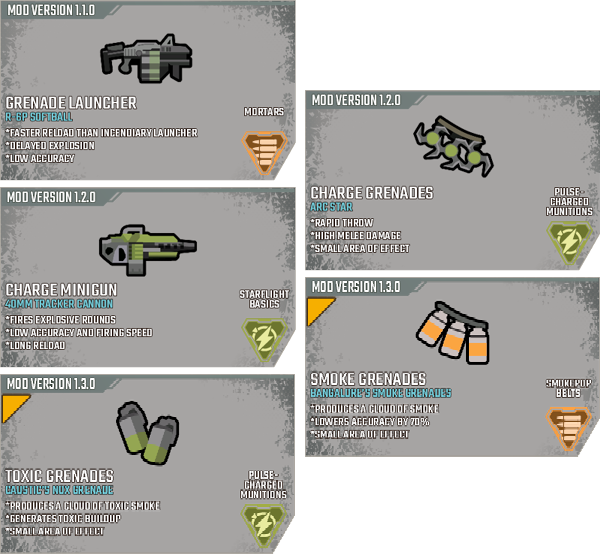 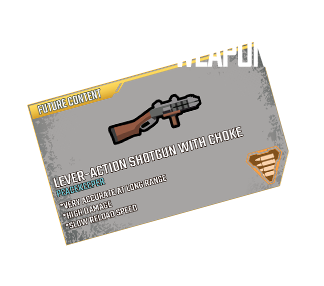 There shouldn’t be any incompatibilities or issues, but in case anything pops up, report issues in the comments.

Q: Do the Apex: Rimworld Legends weapons spawn randomly on pawns?
A: Yes, they should be added to the available item pool when spawning raids.

Q: Will you keep updating the mod with new weapons coming out to Apex?
A: That’s the plan! At the time of writing, L-Star is already in the mod, even though it didn’t come out on Apex: Legends yet!

Q: Is this mod compatibile with Combat Extended?
A: It is with the patch. Load the patch after loading Apex Rimworld Legends.

Link to the patch: Now included

Q: Why is your mod special?
A: I am a vanilla player. Anything that doesn't suit vanilla game makes me cringe and I stay away from it. I did however find the game lacking after some time, therefore I've created these weapons to be as accurate and as close to vanilla graphics style as possible. What is special? The best part is - nothing in this mod is special at all. Nothing will make you go "Oh that's unusual", because the whole purpose of this mod is to blend into the existing game.

Graphics are created by me, inspired by weapons in Apex: Legends and Titanfall.

Pelador for help with advanced coding. Check out his mods!

Andross for doing a CE Patch from scratch. Guy's a legend.